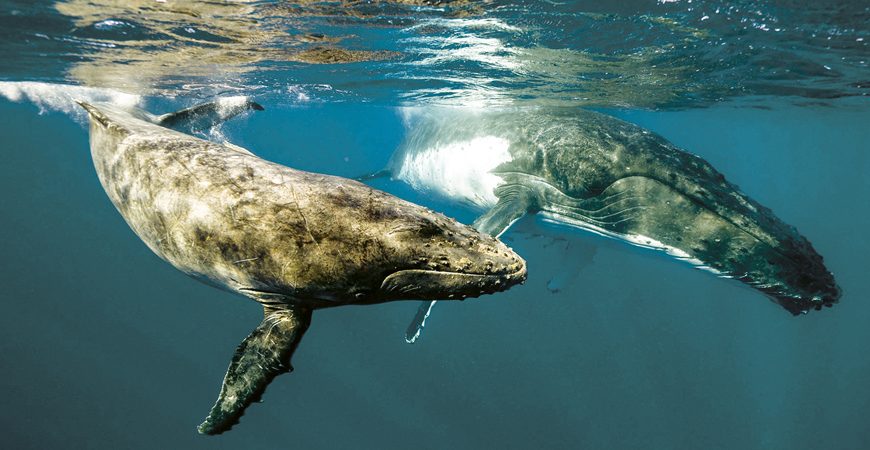 The Carbon sink
Whales accumulate carbon in their bodies during their long lives. When they die, they sink to the bottom of the ocean; each great whale sequesters 33 tons (30.000kg) of CO2 on average, taking that carbon out of the atmosphere for centuries. A tree, meanwhile, absorbs only up to 48 pounds (20 kg) of CO2 a year. This is only the beginning of the story.

The whale pump
Wherever whales, the largest living things on earth, are found, so are populations of some of the smallest, phytoplankton. It turns out that whales’ waste products contain exactly the substances phytoplankton need to grow. Whales bring minerals up to the ocean surface through their vertical movement, called the “whale pump,” and through their migration across oceans, called the “whale conveyor belt”. Preliminary modelling and estimates indicate that this fertilizing activity adds significantly to phytoplankton growth in the areas whales frequent visit.

These microscopic creatures not only contribute at least 50 percent of all oxygen to our atmosphere, they do so by capturing about 37 billion metric tons of CO2, an estimated 40 percent of all CO2 produced. To put things in perspective, we calculate that this is equivalent to the amount of CO2 captured by 1.70 trillion trees, four Amazon forests’ worth. More phytoplankton means more carbon capture.

This information was taken from an article in the FINANCE & DEVELOPMENT Magazine, December 2019, 56, NO. 4  interview with Ralph Chami, Sena Ozzosun,Thomas Cosimano and Connel Fullenkamp.